Fact of the Day: The Great Disappointment 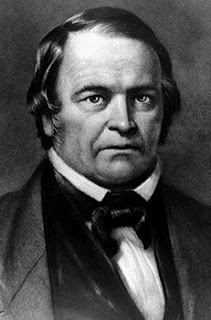 In the 19th century, preacher William Miller predicted that Jesus would return to Earth and rapture would begin somewhere between 1843 to 1844. After his first prediction failed, he made another one (also in 1844) claiming he miscalculated dates he studied from the Bible. Thousands of followers believed in Miller but when nothing happened chaos broke out in many places, and many lost their faith. The event then became known as The Great Disappointment. Miller still held onto his belief on his deathbed, thinking (in 1849) that the rapture would happen very soon.
Posted by Adam at 12:00 AM

He's lucky people didn't tar and feather him and ride him out of town on a rail.

And there are people who still to this day believe that the rapture will be happening soon.

But Jesus is between us;He resurrected and live forever at least that what I believe and I have understood from my religion. Kisses, Adam:)

People still try predicting this stuff!!! I say leave well enough alone so that people that are nervous like me can get a good nights sleep. lol

Never take these people seriously. No one knows if and when the world will end. Just live your life.

Somewhere in the Bible, doesn't it say only fools will predict the end.?? :))
Saw your comment at Meme's and wanted to ask you to come over and see a turtle at my place today. :)

Actually, we must be prepared everyday coz we never know when we gonna die. End of the world or not.

This is just crazy.

Sounds like that guy from last year who did this. Well, we all gotta go sometime. I'm a believer so there's no problem there!

that is just crazy

I just don't get the mass amount of people who take another human's word for when the world is going to end. Nut Jobs. The whole lot of them.

ha-ha-ha, i'm laughing! doesn't seem like much has changed in the last 100+ yrs.