Fact of the Day: Liberal Texas 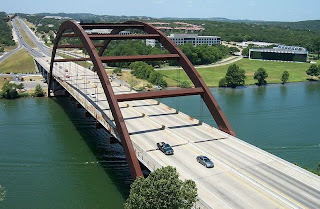 Despite being the capital of a red-state like Texas, the city of Austin is known for an overwhelming majority of liberal and Democratic residents. It is often nicknamed "The People's Republic of Austin" by conservative Texans and Republicans in the state house. In the 2012 presidential election, over 60 percent (versus Romney's 36 percent) of Austin residents voted for President Barack Obama.
Posted by Adam at 12:00 AM

Email ThisBlogThis!Share to TwitterShare to FacebookShare to Pinterest
Labels: democrat, fact of the day, Obama, texas

Oh wow! That is a huge surprise! Who would have thunk it?

thanks for this. i learned something new :)

This is something I hadn't heard before. Interesting!

I had no idea. I assumed it was the other way around. Just goes to show ya...

It sounds like here in conservative Alberta where the capital city of Edmonton is the most liberal place in the province.

And here I thought all of Texas loved Rick Perry and George Dubya.

I guess some texans have a brain

having lived in texas for 5 yrs now, i live about 3 hours away from austin. i've been to 3 austin city limits music festivals and other trips to austin. everyone told me i would love it there. i was expecting it to be sort of like san francisco, but it isn't. maybe i had set my standards up too high. it still feels like texas, although, i definitely like the vibe there more than anywhere else i've been here.

Austin is a a great place to visit. I just leave the politics out of it.

very interesting! that's like Atlanta being a liberal city in a republican state