Fact of the Day: Separation of Shinto and State 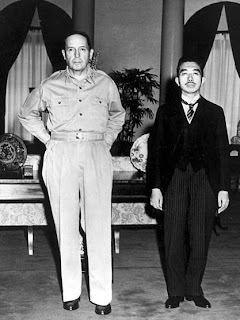 After World War II when the United States occupied Japan, the American government separated the official Shinto religion from the Japanese government. Not only did the separation apply only to the government, Emperor Showa was forced to deny the ancient claim that the Japanese Imperial Family were direct descendants of the sun goddess Amaterasu.
Posted by Adam at 12:00 AM

love these war facts, thanks!

This is one historical fact that I know:)

I always have admired Japanese people to adapt themselves to circumstances. They are strong and intelligent . Kisses:)

One I knew of

Very interesting historical information. I never knew about this!

They sure have a higher work ethic than most

And about time too. It's never a good thing when political rulers identify themselves as divine.

So when will North Korea finally do this, and accept that Kim Jong Un is not in charge of making the sun shine and the mountains "sing with joy"?

the western kings and queens were (almost always) Christian, so they couldn't claim any kind of divine heritage without angering the church. So they claimed that it was the divine right of kings to rule. That God wanted them to be the powerful monarchs of a country.

Even democratic leaders do it. In the last Republican presidential primaries, several candidates claimed that God told them to run for president.

The greatest way for a ruler to rule with no questions asked is to control the main religion.

probably never. North Korea may have taken a cue from the Soviet Union and established no religion, but Un's grandfather made himself a god. Kim Jong-il claimed he was born (in reality he was born in the soviet union) in a Japan-controlled Korea on a mountaintop or something with a rainbow and a new star in the sky.

Then MacArthur took him out and kicked the crap out of him at one-on-one.