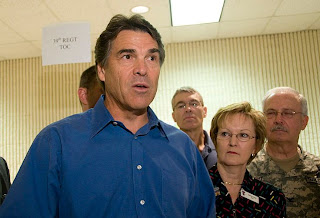 After an embarrassingly laughable presidential campaign in 2011-2012 (eventually losing the nomination to Mitt Romney), Governor Rick Perry of Texas stated he won't seek a fifth term as he's served as Governor since 2000. He hasn't ruled out another run for the White House. I guess Perry realized as Texas' longest-serving governor, he has to give another Republican a chance to embarrass the state of Texas. Though I wouldn't say that a Democrat couldn't win next year, and if that happens they will be the first Democratic governor of Texas since Ann Richards in 1995.
Posted by Adam at 10:49 PM

Hey, maybe that woman who did the filibuster could run and be your next governor! Wouldn't that be great?

well she couldn't be my next governor. I live in South Carolina. Though our red state Republican governor Nikki Haley almost lost the gubernatorial race in 2010 in the biggest GOP landslide in decades.

She's up for re-election the same year as Texas' governor race, and there's a good chance she could lose. Though South Carolina never fails to surprise me on how it can break records on political stupidity.

I really don't know why these people have to hold a press conference just to announce they are leaving office.

man, a girl can dream.