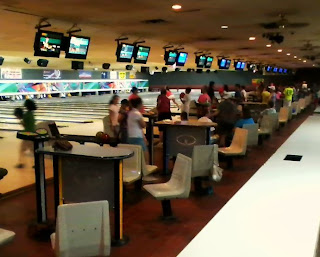 Daisy and I go bowling about once a month, and our trip in July was quite strange. The odd part is that we went on a monday at noon, and the place was very crowded.  There was two (maybe school) buses in the parking lot, so there were a chaotic group of children there as well. 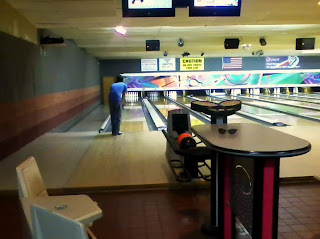 We got the very far left lane in the whole place. I don't really like it. Kinda messes with my aim with a wall to the left. So used to an endless number of lanes in both sides of my vision. 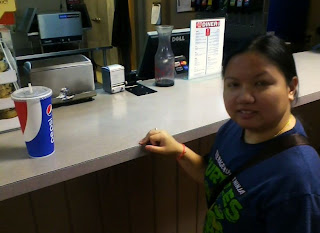 Daisy took no hesistation rushing to the snack bar. I got to her soon after bowling my first frame and she already had her large soda. 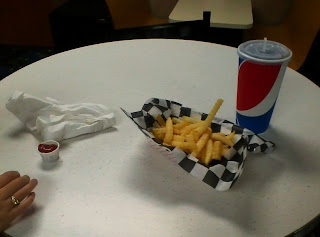 She ordered french fries as a snack (took her to subway for lunch later) and they were okay. A little plain but I can't complain. 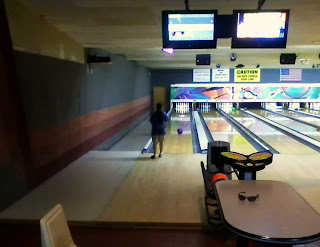 Daisy did rather decent at bowling. But she was sadden by the fact that she never got a single strike in the two games we played. 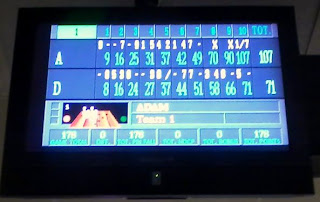 I did really good at the first game. A rather slow start (trying to get my aim re-adjusted) but ended very well. 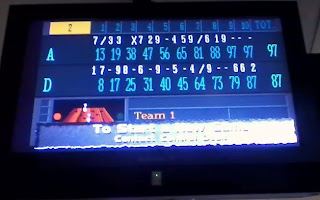 The 2nd game I did a little better, but failed miserably in the last frame. The psychological factor of the last frame will haunt me for the rest of my days.
Posted by Adam at 12:00 PM

you'll forget it in old age

Have not done that in years. Doubt I could pick up one of the balls now. I like your new photo.

I'm the world's worst bowler. I go maybe once a year. Maybe.

i just missed bowling. We used to play bowling with friends.

I haven't been bowling in so long!

Bowling is really fun many times I dont!

Bowling once a month? thats awesome
we are planning for bowling sometime soon too.
And the crispy fries look yum!

I love bowling! I would actually love to have one of the last lanes. I always get stuck next to people who drive me insane, so the fewer people to deal with, the better in my book!

well I have tried this once and it was
really fun, i like it a lot and i manage
to do a strike even once

I really enjoy bowling. I'm not very good at it, but I have fun.

dude, i bet you'll forget about your low score, sometime mr. silly. i imagine it was extremely noisy, and chaotic that day. i don't know if i would like bowling on the far lane either.