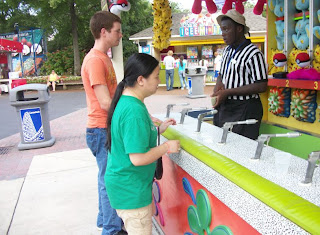 While at Carowinds, Daisy and I decided to play against each other in the carnival game where you use the water-gun to "race" to the finish. 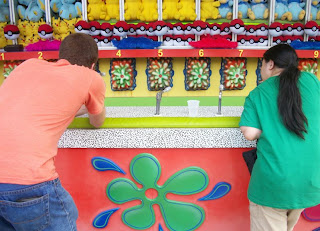 I actually like this version than previous ones I've tried. You have to pick it up and aim it which adds a bit more skill to it. 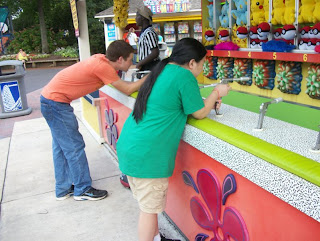 But it wasn't terribly difficult, at least for me. Because I won. 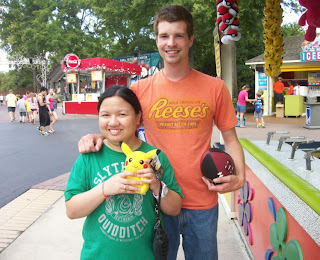 But I gave Daisy the prize anyway.
Posted by Adam at 12:00 PM

Pretty photos! Love these games!
I have this yellow toy!=)

Between the Harry Potter shirt and the Reese's pb cup shirt, you guys both win. You look great together. And you're a good man for giving her the Pikachu. I bet that made her day.

This is my favourite game. How sweet that you gave her the prize!

that's so sweet of you Adam, you are a nice guy!

Always a gentlemen and not in the Psy style :-)

Aaaaaaw...you did the right thing:)

THAT WAS ONE OF TE THINGS I ENJOYED WHEN GOING TO FAIRS OR CARNIVALS. HOWEVER, I WAS NOT TO LUCKY AT WINNING LIKE YOU. I AM SURE THE YOUNG LADY WAS PLEASED YOU WERE SO THOUGHTFUL.

I have that same Reese shirt. Well, I stole it from my husband. Anyway, nice to see this post. Looks like a fun day. Very cool.

great outing you had, i suppose

Congrats on the win! You racked up some pretty sweet prizes that day!

well you sure is a gamer huh, well done!
anyway a couple doing such, just so sweet