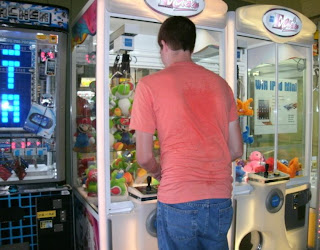 Daisy took this picture of me at Carowinds theme park in their little arcade while we were waiting for the water park to open. We were going to play air hockey but some kid took our spot as soon as we got enough tokens. So I played the crane machine with Nintendo's Mario, Luigi, and Yoshi in them. I had two tries and got one perfect on the first try. It's a shame the crane refused to pick Mario up.
Posted by Adam at 1:00 PM

Email ThisBlogThis!Share to TwitterShare to FacebookShare to Pinterest
Labels: carowinds

Does anyone ever actually win at that game?

The trick is getting more out than what you put in.

well such game was really tough, i rare see someone get to catch one
that's why i never played that

My brother in law is really good at the crane. I can't play. I never win, but get so close and get mad so I put more money in and repeat and repeat.

My daughter would be in heaven if she found a Mario crane machine! I think she would spend all day just playing that alone!

Alas, I have never won a thing on these!

I wonder if anyone ever wins something decent at these things!

Congrats on winning! I never see anyone win at one of these!

air hockey used to be one of my fave games!