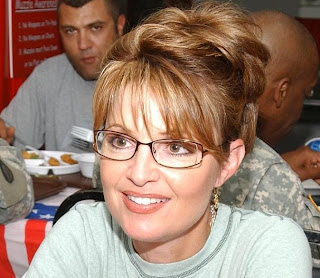 On a recent interview with Sean Hannity, Sarah Palin the former Republican Vice President nominee of 2008 declared that she was thinking of running for the U.S. Senate. Alaska's only Democratic Senator Mark Begich is up for re-election next year, and will have a tough battle as Alaska usually votes Republican. Though I personally don't seriously believe she'd run for office again, after all she quit her first term as Alaska's governor. A seat in the Senate is two years longer than that.
Posted by Adam at 11:10 PM

I hope she runs, she is very entertaining.

Love her or hate her, she's one tough lady.

The first soft picture I see of Ms. Palin. Whatever anyone thinks about her, positive, negative, she has the X-factor.

well there's a bigger tendency that she'll quit there too

I would personally like it if we didn't hear from her any more. Not a fan.