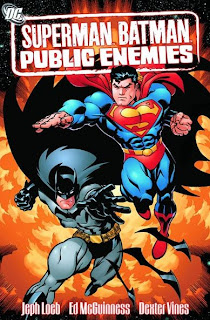 After watching Man of Steel, I was still in a mood for more DC comics movies and I decided to return to their (usually excellent) animated tales. Like most of its sister films Superman/Batman Public Enemies is based on a particular comic book story-line. 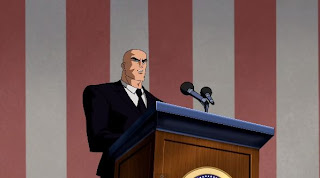 The story starts off with America in peril. Lex Luthor is supposedly reformed and runs as a third party candidate for President of the United States. With dark and uncertain times, Luthor convinces voters to elect him and he becomes President. While Luthor restores the country back to normal, he condemns all super-heroes who work outside the government's control. While President Luthor gains the trust of super-heroes such as Captain Atom and Power Girl, Superman and Batman remain highly skeptical. 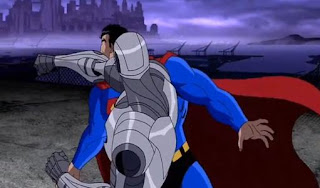 Luthor demands a meeting with Superman, and when the Man of Steel arrives the new President taunts him into confrontation. Which lets Superman's old foe Metallo to begin an epic battle. Metallo gains the upper-hand until Batman arrives to save Superman. The two super-heroes survive, but not only do they have to worry about Luthor's plan but a giant meteor made of Kryptonite is headed straight to Earth. 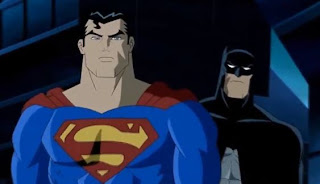 While I enjoy a good tale starring either the Man of Steel or the Dark Knight, I have to say that this adventure was rather stale. Powers of heroes and villains are very unbalanced, and Luthor bizarrely loses his marbles. I liked the premise, but it won't win over anyone outside of DC fans.
Posted by Adam at 5:00 PM

Agreed this one was blah, never liked it much