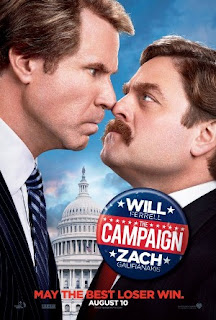 I've always been a big fan of Will Ferrell's movies, but last year I overlooked The Campaign. I didn't really see the trailers, but my brother had seen it and recommended it with high praise. Being a rather political person, I eventually got the motivation to watch it. 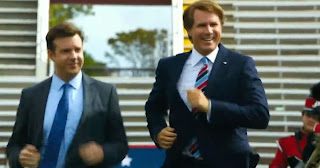 The film is about the 2012 election of four-term Democratic congressman Cam Brady. Brady is relatively popular in his home-district in North Carolina, and he had won most of his previous elections unopposed by either Democrats or Republicans. However one day he accidentally leaves a rather controversial phone message to a local family, and his popularity drops in a huge plunge. 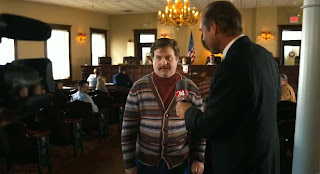 Two evil businessmen known as The Motch Brothers (which I assume are based on the real-life Koch Brothers) see Brady's ability to lose an election. So they decided to call up an old friend to get his son Marty Huggins to run as a Republican challenger. Marty is a rather simple (and weird) guy, and he's so thrilled to run for office that he doesn't foresee that he's being used by the Motch brothers to fulfill their evil plans. But that doesn't stop Huggins or Brady from outrageous attempts of political mudslinging. 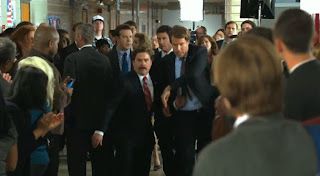 Overall I thought The Campaign was not only a hilarious comedy, but made very sad but true statements about modern American politics. I loved Brady's arrogance and bizarre ideas and he mixed well with Huggins "unique" personality. It's not Will Ferrell's best comedy (those who aren't fans won't be won over), but I laughed more times than I could count.
Posted by Adam at 11:19 PM

My husband is a Will Ferrell fan, but personally, I can't stand his movies. Except for Elf, because that is the greatest holiday movie ever :)

I liked that movie a lot, it was quite hilarious

Don't think I would like this movie, but then again I really wouldn't know until I started to watch it.

This is the sort of movie that my brother would enjoy.

He makes some good movies

I enjoyed it too

Farrell is hit or miss for me

never heard of this one, but I generally don't follow Ferrell's movies