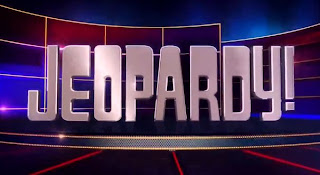 Jeopardy is older than I am, and my personal favorite game show. Those who know me well, shouldn't be surprised at all. The questions are usually pretty tough, the way of answering strange, but I could never get enough of it. 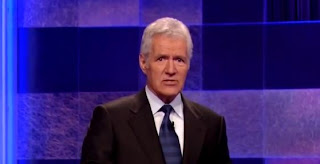 It's funny to see how much Alex Trebek has changed over the years though. He ironically looks younger than he did back in the 80's when he first hosted the modern version of the show. It will be hard to find a replacement when he finally retires. 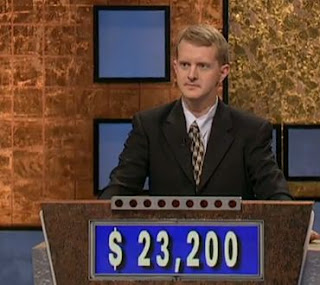 And who could forget Ken Jennings? He won 74 games during his run (you get to stay on the show until you lose) which is the highest by far for anyone else on the show. One of the smartest men in America for sure. 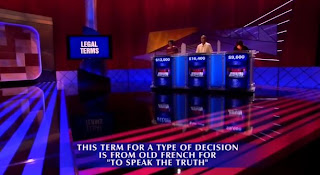 Final Jeopardy is usually the toughest question of the show. Though I do find it funny when some of these people who got tough questions right, but struggle with a somewhat easy question in the final round. You also get to see who has really bad handwriting.
Posted by Adam at 4:00 PM

I love Jeopardy, too. The questions get easier as you get older. (Although some categories are pretty tough!) I always wondered why my Mom knew so many answers. I guess we accumulate trivia as we get older.

One of my favorites as well along with Wheel of Fortune. I learn a lot from Jeopardy.

I love watching Jeopardy! It's so fun to see how much you know
http://lexiluthor.blogspot.com/

What is the best gameshow for 500 Adam!

Jeopardy is my all time favorite game show. I watch it just about every night. I've taken the online test a few times and it's my dream to be on the show. I always do well when I watch the show and librarians are always good contestants! My boss (librarian and library director) made it to the face to face round they do before deciding who goes on the air, and she didn't go because she chickened out! A former work rival of mine made it onto the show and her episode aired last week. She came in third and I was so happy she didn't win :)

I enjoy watching it to

It's a great show!

This is one of my favourite shows. I tape it, and my husband and I watch it some evenings. I like game shows that challenge your mind.

Some suggest that Ken Jennings should be the next host.

One of my favorite game shows too, but I suck at the answers!

I can get the sports answers

Oh, what a pity! this contest never came to Spain. It must be interesting!!Kisses:)

LOve Jeopardy also. And I am old enough to remember the first show. EEEee!

In Italy we can't see this tv series, so sad!
xx

I havent seen this particular show,
but I like watching similar shows on the Greek TV.

I love Jeopardy. I used to watch it constantly but hardly ever have the time any more. I need to start DVR-ing it!

Thank you for sharing!

I do appreciate that the questions are tough. I'd much rather see this than a gameshow for idiots where the question is, "Who was the first president?" and we're all supposed to laugh when they answer wrong. Hint: that doesn't make me laugh. That makes me die a little inside.

I love Jeopardy and I always play along at home!

I would fail terribly playing this game!

what is a game i'm not good at?