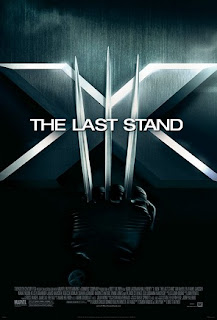 Along with the original Spider-Man film, the first two X-Men movies were one of the first super-hero silver-screen adventures I really enjoyed. In 2006 I ended up ignoring X-Men: The Last Stand as I heard of some of the events of the plot and some of them didn't settle right with me. I was hoping First Class was going to renew the story, but a new film called Days of Future Past is a sequel not only to First Class but The Last Stand as well. So I felt obligated to go ahead and watch the third movie.

The story sets off shortly after the events of the second. Everyone is upset at the sudden loss of Jean Grey, especially Cyclops and Wolverine.  One day Cyclops visits the lake Jean was last seen, and almost magically she reappears with no memory why. Their reunion is short-lived as when Professor Xavier, Storm, and Wolverine arrive, Cyclops is nowhere to be found and Jean is unconscious.

Xavier explains that Jean has a duo-personality where one side is the sweet Jean Grey they all knew. The other half is the uncontrollable Phoenix, who has powers greater than any other mutant.  When Charles Xavier dies trying to save everyone from the Phoenix, everyone from his school are devastated. But there is little time to mourn, as Magneto uses Jean Grey as an ally to fight the supporters of "the cure" which can turn any mutant back into an ordinary human being.

Overall The Last Stand was just as bad as I had imagined it would be. The action is decent, but there are often too many characters to count, and the death (or the loss of powers) of many prominent heroes and villains was a strange choice. It seems like they intended for it to be the final film but kept making sequels anyway. I hope that Days of Future Past will fix what The Last Stand had broken.
Posted by Adam at 4:00 PM

I watched X Men Origins last night. Charles was walking in it. Then I saw the beginning of The Last Stand. As you know, Magneto and Charles visit young Jean. Charles is walking there, as well.
But, in First Class, Charles is shot and paralyzed. Seems like lazy scriptwriting on the part of First Class, since they knew that two movies made before had Charles walking.
While I liked the way First Class ended, it would seem to me that they should have found a way to end it differently, since they were tied to events of two earlier movies.
Well, look at me with my own nerdy self!
Don't get me started on how Spock came back to life in Star Trek III either.
Hope I didn't spoil it for you.
Won't tell you that the Titanic sinks, either.

Awful in every way, one of the worst sequels ever. Such a load of crap. days of Future Past will hopefully be better. And agree with Al, stupid on continuity issues.

Oh ! I forgot what the first ... is it one or two was about, not a big fan ! just enjoyed the movie.

I noticed that, I was like "wait a minute, Charles relearned how to walk!"

I haven't seen XMEN. Judging from Pat's comment, I might be happy I missed out on it.

well as far as i know, last stand was the ending of that particular plot line
and what they were having now was based on a different comic book,
hmm as for me i kinda like it but then i guess they could do better than that,
as for "days of future past" im certain that it would be great