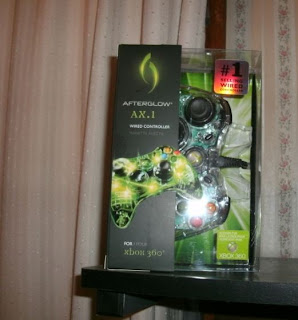 My original Xbox 360 controller started to show its age for several months as it would often shut off and refuse to work whether it was in an adventure in single-player or in the middle of a frantic match in Halo 4. Tired of it I decided to get a new one but ending up getting one of the wired 360 controllers. 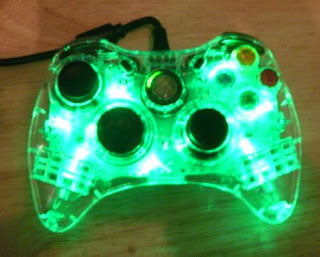 The most obvious thing about the controller is the glow. There are several colors to choose from but you only get one choice. Green is all they had at the time, and since it fit the color of Xbox I was fine with it. Though it glows very bright in dark rooms. 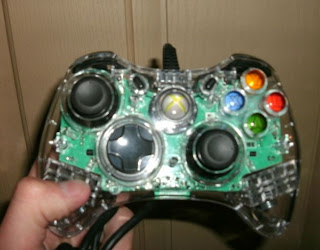 Luckily there is a little button on the back which can turn the lights off. Then it's a transparent controller and a good one at that. I remember the old 3rd party controllers from the old days and they were pretty terrible. But the Afterglow feels pretty close to the standard Xbox 360 controller. Despite not being wireless it's a smart alternative.
Posted by Adam at 9:03 PM

Email ThisBlogThis!Share to TwitterShare to FacebookShare to Pinterest
Labels: xbox 360

Well, I don't think you'll be losing that in the dark.