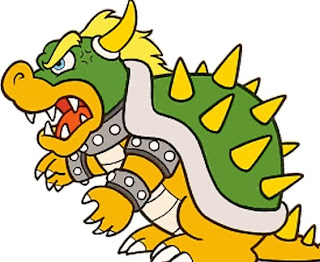 Bowser's first appearance was in the original Super Mario Bros. While Donkey Kong was Mario's original nemesis, Bowser surpassed him and made many forget Mario's old feud. Bowser hasn't changed much over the years though I still remember when everyone use to call him King Koopa.

His Japanese name is not Bowser but  大魔王クッパ (Dai Mao Kuppa) meaning the Great Demon King Kuppa. Shigeru Miyamoto chose his name Kuppa after the name for a Korean dish served in Japan. 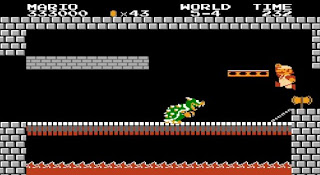 Well almost every gamer knows that Bowser awaits you at the end of each castle. All you need is to get to the axe and he falls right into the lava. 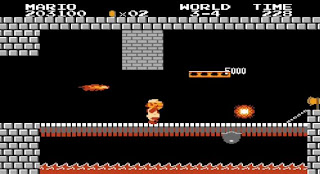 But you can also defeat him as Fire Mario as well. One thing most people never realized is that the first seven Bowsers were decoys. Each of them is a regular enemy found in the game. Though they do progressively get tougher to defeat 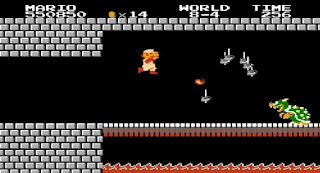 The biggest challenge is the real Bowser. When I finally finished the original game I had enough skill to stay as Fire Mario until the end but got scared and took some damage to make it to the axe to victory. Those who can dodge all the fire and hammers are true gamers.
Posted by Adam at 1:00 PM

My all time favorite :)

I love playing Mario! I remember when I played Mario on my Super Nintendo like every day :)

I used to love stomping on Bowser's head!

Knew koopa but not that it was from a dish

the interface is too retro haha

I love it in Super Mario Galaxy and Mario Kart ! :)