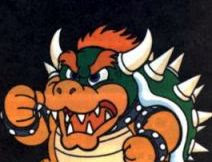 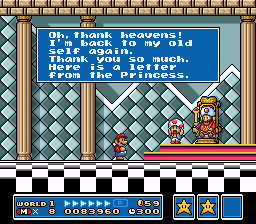 Even though Super Mario Bros. 3 is set in the Mushroom Kingdom, there are many kings of different lands. And Bowser and his children were responsible for them morphing into animals or monsters. I always thought that was one of the coolest things about defeating each boss was saving each king.

Bowser's Castle and his world was easily the toughest part of the whole game. Personally I think it's the most challenging levels in the whole series. I really liked how they changed the battle from the original.
Posted by Adam at 1:00 PM

Never understood the appeal of Mario.

i love super mario! childhood favorite of mine

Btw, Im following you now on GFC. hope you can follow me back. :)

I remembered playing Super Mario...
One of my favorites when I was a kid...

One can hate this guy, or but i missed it when not playing the game! LOL

boss stages, such a great yet tough thing to reach in all games

Challenging Bowser was always the best part of playing Mario!

he looks a bit like BeBop from NINJA TURTLES :)