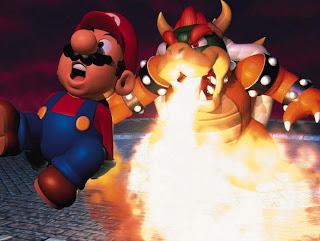 Even though he's now been defeated numerous times, Bowser's appearance in Super Mario 64 on N64 (and DS) is one his most memorable. Mainly because he shows up all the time. 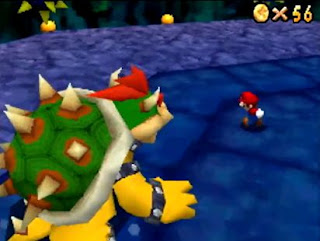 The boss fights are almost always Bowser and they share a similar method. Mainly to spin Bowser around and throw him into a mine.Very easy at first, but the later levels will make you have to aim when you throw him, and the platform will crumble or tilt like crazy.

The final battle was pretty epic, one of Mario's finest moments.
Posted by Adam at 2:00 PM

I used to love playing Mario World on my Gameboy...good times! :-)

I never played but it does look fun.

I loved Mariooooooo!!! it reminds me of my childhood

Gotta get this one for my child!

I always try my hand at video games at Asian gatherings but always am rather unsuccessful haha. It always did look so fun! Glad you were able to enjoy it!

My great grandson and I play games on the computer. I beat him most times and he cannot stand it. I never played video games tho.

OMG! I'm a fan of Super Mario for a decade now! I like your blog :)

please do visit my blog and I'd love to hear feedbacks from you! XOXO! :)

My Lyfe ; My Story
@MyLyfeMyStory ♥ ♥

I love Super Mario 64 and the fights with Bowser are some of my absolute favorite parts of the game, especially the climatic final battle.