Batman Beyond: Return of the Joker (2000 Film) Review 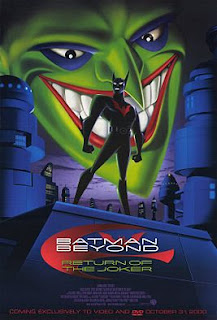 I originally didn't watch Batman Beyond when it first premiered over a decade ago. But I did enjoy watching the first season of it very recently. Though many of the original villains were very bland, and many of Batman's old enemies didn't show up in the future. Though the reason I wanted to watch The Return of the Joker was for the futuristic revival of Batman's greatest nemesis. 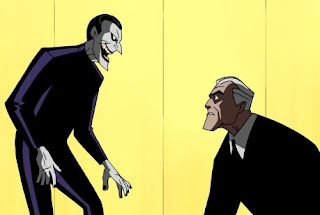 Those not familar with Batman Beyond should know that it's set many decades after Bruce Wayne's career as Batman. Due to old age, he retired but eventually passed the role on to Terry McGinnis. During a party, everything seems to be going fine. But the now elderly Bruce Wayne sees the Joker return to taunt him, and he can't believe his eyes. As for he saw his death personally forty years before in their final confrontation. 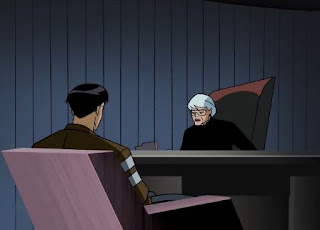 The return of the Joker has everyone shocked and puzzled. For what they can tell, the new Joker is exactly the same as the one that was Gotham's worst nightmare. Bruce Wayne isn't sure what to do, but Terry is determined to find the truth. Answers or not, the Joker plans to give the new Batman the challenge of a lifetime. 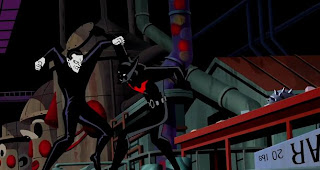 Return of the Joker is one of the best Batman animated movies I've seen so far. The story is well-done, and has a wonderful conclusion. This is something no Batman fan should miss.
Posted by Adam at 2:30 PM

I wonder if they'll make it into a movie.

Thanks for your kind words on my blog, they sweetened my day!
I think I want to watch this now...

I never caught that one but I shall go ahead and tell you that I will check that out though I intend to do nothing of the sort.

It is a good one

We are going to be catching up on all the Batman movies soon. If I like those, I'll keep this one in mind too.

I love this Batman film!