Ben Affleck is the New Batman 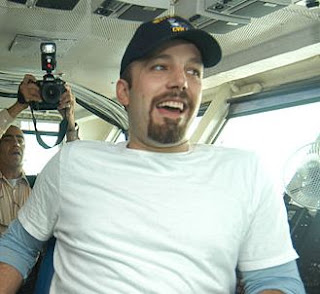 Since the new Batman/Superman film was announced, many wondered who would play the Dark Knight as Christian Bale said he wouldn't return after Dark Knight Rises. Apparently the role is now for Ben Affleck, though this isn't the first time he's played a super-hero. Back in 2003 he played the title role in Marvel's Daredevil film. Though many aren't sure of how well he'll do as Batman. Though I'd like to remind everyone of the skepticism they had when they heard that Heath Ledger was playing the Joker in The Dark Knight.
Posted by Adam at 10:00 AM

We shall see, if a show tune singing guy from Newsies can pull it off, maybe Daredevil can to.

Oh no! I am NOT a Ben Affleck fan. At all. Here's hoping he doesn't ruin Batman-

We'll just have to wait and see...

Heath Ledger was amazing as the Joker!

That's a good point about the Heath Ledger skepticism...I had forgotten about that.

I am quite happy with this news when I heard about it. I think Ben would do a great job as Batman.

Living in Aurora, Colorado, made it impossible for me to see "Dark Knight Rises." I think about it all every time I go to a movie. We shall see.

I don't think it's a bad pick. I can't wait to see the film!

So long as Ben keeps the bat cowl on, he'll be fine. It's when he's portraying Bruce Wayne barefaced and has to show more than one facial expression that he'll be in difficulty.

They would be better with an unknown.

well whoever batman may be it is sure worth the wait

You are right about the skepticism, we can only wait and see. Personally, I didn't like Christian Bale, his voice got on my nerves, lol.

he will be horrible... no acting skills, no depth... rather irritating character...

i can't even remember the last movie ben affleck was even in? i guess him jen are busy being parents.

he did win that oscar for argo