Fact of the Day: Divine Right of Kings 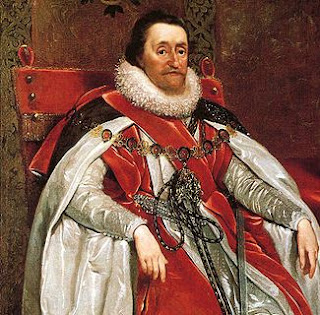 While he wasn't the first monarch in the world to claim a super-natural right to the throne, King James I of England (also King James VI of Scotland) was the first English monarch to use the theory of the Divine Right of Kings. Claiming that as King he has to answer to nobody on Earth, and is given the right to rule by God. Coincidentally he also oversaw the English translation of scripture known as the King James Bible, which still features many supporters who strongly oppose any other English translation.
Posted by Adam at 12:19 AM

Email ThisBlogThis!Share to TwitterShare to FacebookShare to Pinterest
Labels: Christianity, england, fact of the day, Scotland

Took me time to read all the comments, but I really enjoyed the article. It proved to be Very helpful to me and I am sure to all the commenters here! It’s always nice when you can not only be informed, but also entertained!
Estetik

the oldest "asshole" excuse in the book: Divine Right. haha

always tell us something interesting! :)

I love your blog! This post is awesome!
Check out my blog, write your opinion and maybe...follow?
Where are you from?

I thought it was Henry VIII who said he was over everybody on earth and only God was over him. Thanks for teaching us.Kisses:)

I love to learn some curious infos about famous icon!!

I liked him because he was the son of Mary Queen of Scots, and his coming to the throne was kinda a victory for his dead mother who suffered under Elizabeth's rule.

It sounds lke politics in a way, a lot of it is about power.

I saw a series on TV about him. He was an odd duck. Ironic to think he was responsible for the King James Bible.

Hmmm...just a tad arrogant, wasn't he?

I always thought all kings argued that way.

Those kings thought they ruled the world didn't they? Well I suppose to be fair though they kinda did for a while. I would have loved to have lived in that era for a day just to experience what that time period was like.

A little full of himself, I'd say!

I sure didn't know that, what an interesting detail! Thanks for your comment Adam!

He was a homosexual too. (Well, technically bisexual since he did marry and have kids). Today that fact drives Fundamentalists nuts and many won't use the KJV Bible anymore. Hee hee! Way to stick it to them, James!

He had quite the ego