Fact of the Day: Giordano Bruno 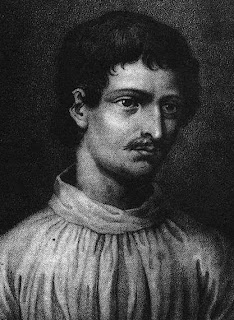 In the 16th century, a man named Giordano Bruno went beyond the Copernican model of space and proposed that the Sun was nothing more than a star (which is true) and stated the very likely possibility of many other planets inhabited by intelligent beings in the universe. Along with his religious views, the Roman Catholic Church were not amused by his work and burned him at the stake for heresy. He gained a notable legacy of supporters in the 19th and 20th century who saw him as an early hero who stood up for free-thought and modern scientific ideas.
Posted by Adam at 12:00 AM

Email ThisBlogThis!Share to TwitterShare to FacebookShare to Pinterest
Labels: Christianity, fact of the day, Italy, Rome

Oh yikes! It's incredible that science progressed when there were so many barriers to it by the church.

Yep, at least the Catholic church is somewhat changing these days.

the church has always been the nest of all evil. So many great, world changing minds have been burnt by the evil church

And for all the grief the Muslims get for being nuts (many of them deservedly so), there's always bedtime stories of the Catholic Church (and, to be fair, many Protestant sects) to scare the kiddies.
Ahhh, religion!

A lot of good people were burned at the stake my religious nuts with closed minds. It must have taken a lot of courage for this man to voice his opinions and risk his life.

Not surprising in the least

I am very proud of Giordano Bruno, he stood out for what he believed in. He was burned in Campo de' fiori I guess
Don't Call Me Fashion Blogger
Facebook
Bloglovin'

It is always the same...poor man. Kisses, Adam:)

Smart back then got you burned, now its just bible quotes

What a bunch of morons back then.So glad we wised up to free thinking!