Fact of the Day: Mars and Murrie 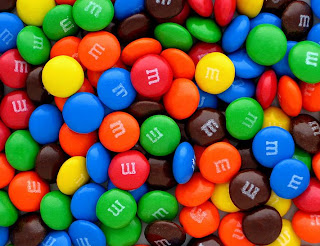 M&Ms were named after candy makers Forrest Mars and Bruce Murrie. Forrest Mars got the idea during the Spanish Civil War when he saw soldiers eating chocolate pellets with a hard shell, which kept it from melting. He used that inspiration to make the famous candy, and some of the first M&Ms were sent to soldiers during World War II.
Posted by Adam at 12:00 AM

Email ThisBlogThis!Share to TwitterShare to FacebookShare to Pinterest
Labels: fact of the day, world war 2

Now that is interesting.

The mini M&M's are the best.

inspiration can come from everywere.. a great story (:

I didin't know this, It's really original!!!
great info!
xx

I knew about Mars but not Murrie. Cool fact!

Have a great Friday.

Peanut M&Ms are the best candy...evah!

This is a neat fact!

I've always wondered what was behind M&M name

I used to be addicted to peanut M&M's. So glad they were invented!!!

And of course, Mars gave his name to the Mars Bar too!

One of the best candy inventions ever!

Wow! I had no idea the candy was that old.

mars and murrie? wow. you're so smart.