Fact of the Day: Polonium 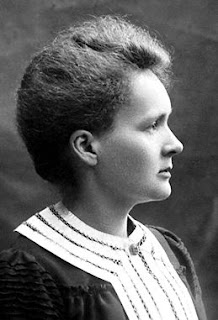 The element Polonium was named after Poland, the home country of its co-discoverer Marie Curie. At the time of it's discovery, Poland was split under the control of the Russian Empire, the German Empire, and Austro-Hungarian Empire. Curie hoped that naming the element would spark a political move for the independence of Poland.
Posted by Adam at 12:00 AM

Email ThisBlogThis!Share to TwitterShare to FacebookShare to Pinterest
Labels: fact of the day, marie curie, Poland

Good gracious! This is another very interesting fact. I had no idea.

Great woman! a reference for all of us.
By the way, yes! they were piggy banks, heheeh. Kisses, Adam:)

she was a wise woman and a great scientist

I've never even heard of Polonium. Was that what gave her radioactive poisoning or was it the other 2-million radioactive things she worked with?

Interesting! It reflects well on Marie Curie's lack of ego that she didn't just name it after herself. Lots of scientists would have.

This is interesting! I never knew that! :D

First I've heard of Polonium too

Polonium...never heard of it. Cool.
That whole independence thing had to wait a few more years though, huh?

She was an incredible and inspirational woman. Way ahead of her time.

they really have interesting way of naming things