Fact of the Day: Prince Phillip 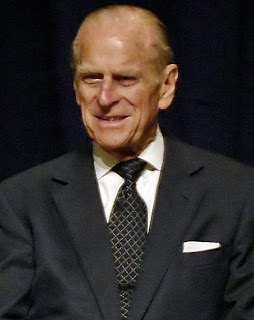 While Queen Elizabeth II is set to surpass Queen Victoria as Great Britain's longest-serving monarch in a few years, many not familiar with the royal family don't know that her husband is still alive. Prince Philip was born a prince to both Greece and Denmark, and married Elizabeth shortly before she became Queen after the death of her father King George VI.
Posted by Adam at 12:00 AM

Email ThisBlogThis!Share to TwitterShare to FacebookShare to Pinterest
Labels: fact of the day, Great Britain

Phil the Greek, known for always putting his foot in it! As non pc as they come.

Thanks for the fact:)

Another fact about Prince Phillip is that he's as racist as they come.

Their marriage is intriguing. I wonder if they're really a happy couple.

Yes, he's a racist, and probably his marriage.

It's true -- I don't know much about Phillip.

how on Earth can there be people who don't know he's alive? He makes a scandal every other day and reminds us that the devil is still breathing :)

I agree with the comment above. I can't believe some people don't know he's alive!

The American media I suppose, they never mention him.

Prince Phillip is a crusty old bastard that you can't kill with a stick.

he is living in her shadow but minding his own business

I never really cared about figures who do nothing anyway.

Hard not to know he's alive

Have a nice weekend :)

they has interesting story indeed

No, the American media doesn't mention him. However, with all the media the Kardashian's get, you would think they were royalty lol.