Fact of the Day: Providence 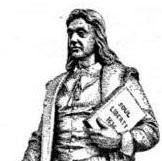 The capital of Rhode Island, Providence was named by theologian Roger Williams for "God's Divine Providence" in 1636. Williams was exiled from the Massachusetts Bay Colony for his political and religious views and was thankful to find his "providence" in what is now Rhode Island. Unlike the Puritans from Massachusetts, he was one of the strongest advocates for religious freedom and the separation of church and state.
Posted by Adam at 12:00 AM

Email ThisBlogThis!Share to TwitterShare to FacebookShare to Pinterest
Labels: fact of the day, Massachusetts, Rhode Island

Another interesting fact. I like knowing where place names originate.

Shouldn't they have named it Williams instead.

well that makes him a wise man

I do love reading all these facts you post, Adam:) Happy Sunday to you and Daisy.

Lovely trivia and a very interesting man. Thanks Adam! We lived in Newport, R.I. for almost two years many years ago. It's nice to find out something about its capital.

A wise man who was ahead of his time.

nice facts... i learned something new! :)

Sounds like a pretty cool guy. Didn't know this.

I think I would have really liked this man!