Fact of the Day: Sherman Pledge 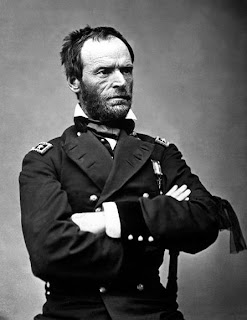 General William Sherman was one of the most notable Union Generals in the Civil War and is often referred to as the first modern military general. Supporters threw his name as a possible candidate in the 1884 presidential election and Sherman responded to the news with this quote "I will not accept if nominated and will not serve if elected.".
Posted by Adam at 11:59 PM

I like his quote. Shows he was a man with an opinion.

Not suprised with he was at it.

Sounds like a man with a lot of principles.

An interesting man but I hear he is not very popular in Georgia. I would like to learn more about that and about him.

Very interessant. You are a mine of informations :)

I didn't know he was the one that said that. I know the quote though.

Deginitely one of a kind!

If he's so notable why haven't I heard of him? Really, though, he sounds like an honorable guy. Off to Google to learn more...

Just ask the people in Georgia.

A Shermanesque Statement by Lyndon Johnson...

President Lyndon B. Johnson famously invoked the pledge in his March 31, 1968, national address announcing that he would not seek a second full term, saying "I shall not seek, and I will not accept, the nomination of my party for another term as your president."

Haha...I love how he responded!

he seems a tough guy