Fact of the Day: Taikun 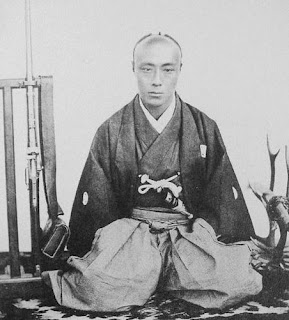 While tycoon in English usually refers to legendary businessmen like Howard Hughes or Bill Gates, the word was taken from Japan. In Japan 大君 (Taikun) was a title meaning "great lord" that referred to the supreme military general and ruler known as the Shogun. The word was brought back to the United States, and one of the first people to receive the nickname was President Abraham Lincoln by his aides John Hay and John Nicolay.

Thanks to Kay and her mom for letting me know this one!
Posted by Adam at 12:00 AM

Email ThisBlogThis!Share to TwitterShare to FacebookShare to Pinterest
Labels: Abraham Lincoln, fact of the day, japan

Yes I learned this from Kay too!

Too cool, Adam. I love how you did this post! Thank you for the mention.

Well, I didn't know this, nice one Adam.

My Lyfe ; My Story
@MyLyfeMyStory ♥ ♥

I had no diea!

P.S.: Thanks for your words on my last post!

This is really interesting. Thank you , Adam for teaching us. Kisses:)

Didn't know this. Thanks for sharing:)

Cool. I like the Japanese word 'Taikun' better than the English 'Tycoon'

wow tat so cool !
Nice interesting post !
Nice to meet you From Singapore What a beauty Country u are in!
Do Drop by and Follow Me On GFC

well they are pronounced the same

Japan is a mistery. Just saw the movie Hachi of the loyalty of an Akita. Was strange and interesting.

Thanx for sharing this.


Have a lovely weekend,

Thanks for sharing, have a nice weekend :)

My daughter was learning to write and send me a note. It said "I like you. You get me fied tieken." Which translates to Fried Chicken. Not far off from Taikun I suppose ;)