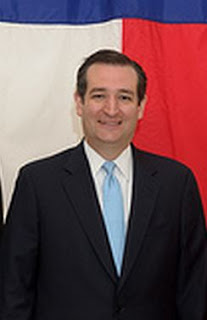 With a lot support among those on the far-right, freshman Senator Ted Cruz had been pondering about making a serious run for president in 2016. Though there was something that had been holding Cruz back, and that was the fact he was born in Canada to an American mother and a Cuban father. Apparently Cruz is a dual citizen of both the United States and Canada, but not for long. He's officially going to denounce his Canadian citizenship.

Though Cruz himself was unsure if he really was or not, so he made a statement saying "Assuming that is true, then sure, I will renounce any Canadian citizenship. Nothing against Canada, but I’m an American by birth and as a U.S. senator; I believe I should be only an American." I do find it hilarious that Republicans are now saying Cruz is qualified for president after refusing to believe that President Obama was born in Hawaii.
Posted by Adam at 11:30 PM

I bet he would suddenly remember he was a Canadian if he ever wanted to go back for something of benefit to himself! Sounds like a typical politician to me!

Always okay when it is for their benefit

You can have him

Oh sure... And if things don't work out down south, he'll suddenly become all sentimental about Canada.

I was wondering what the story was with this guy.

Please keep him there. We have enough self serving politicians here!