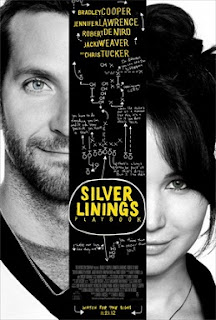 When Silver Linings Playbook came out last year, it had been largely ignored by me. But I took more notice when Jennifer Lawrence (who also played the main hero in The Hunger Games) won a Oscar for Best Actress for her role in the film. I wasn't too terribly sure if I'd like it, but I was curious to see if it met the critical acclaim.

The film starts with Patrick Solitano Jr. who had just been released from a mental hospital. Even though he had gotten formal approval to return to society, he's still suffers from mental stress. His refuses to accept that his marriage is over, and gets irate when he hears his wedding song. He also displays other bizarre behavior and constant struggles to be forgiven.

After his friend invites him to dinner, he meets his friend's sister-in-law Tiffany Maxwell who has her own problems. Tiffany hasn't been the same since the death of her husband, but their similar situations give the two something in common. Despite many verbal-fights, the more time Pat and Tiffany spend together the more their lives change for the better.

I have to admit, I can see why the film gained such widespread acclaim. It's smart, witty, and features such an original tale. Bradley Cooper and Jennifer Lawrence play amazing roles and their characters counter each other so well. I regret taking so long to see it, but it's certainly worth its merits.
Posted by Adam at 1:02 PM

Never saw this one yet, glad to know it is good

I agree with you, only saw it a month ago!

I LOVED this movie! Saw it at the show, and rented it recently! Such great actors and great story line!

it sounds good, I haven't seen it.

We have to watch each day for a silver lining in our lives.

well this got a lot of award it must be great

Stupid Blockbuster by Mail has such a demand on this movie, I haven't gotten it yet. I have been wanting to see it since it first hit the theaters. I may have to hit up Redbox to get it if they take too much longer!