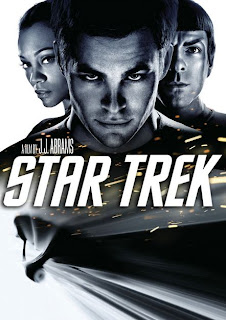 Though I know a good number of things about the original Star Trek show, I never really watched it nor any of the movies either. I also ignored The Next Generation and other sequel series. But the 2009 film simply called Star Trek begins the story anew, and after hearing about it's sequel Into Darkness I was intrigued. 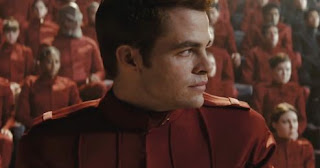 The story starts off with James T. Kirk's father George aboard the USS Kelvin in space. The ship is attacked by Nero and his Romulan space-craft. They request to see their captain Robau to negotiate a truce but he is killed when Nero doesn't get what he seeks. George Kirk becomes Captain but not for long as he crashes The USS Kelvin to save the crew, his wife, and his son who is born during the battle. Which leaves James Kirk fatherless, and growing up in a rather bitter childhood. He is eventually persuaded to join the Starfleet Federation.

However as Kirk starts to rise as a officer, he eventually learns that Nero is from the future. His arrival created an alternate universe where everyone's lives have changed drastically. For example in the original time-line, Kirk was raised by his father, and was born in Riverside, Iowa not space. He learns that Nero seeks revenge upon Spock but also planet Vulcan and all other planets in the Federation. After their Captain is taken by Nero's forces, Kirk gains control of the USS Enterprise to stop Nero at all costs.

Overall I thought the new Star Trek was a fantastic movie. I liked how the new alternate universe gave the story more freedom, and it has plenty of surprises. Even though he doesn't look much like the original Kirk, I thought Chris Pine did a great job along with Zachary Quinto as Spock and Zoe Saldana as Nyota Uhura. Its director J.J. Abrams is set to direct Star War Episode VIII and I feel confident he'll do a job with it after seeing his take on Star Trek.
Posted by Adam at 2:35 PM

Hey Adam! I enjoyed your review! I have been a Trekkie from the very beginning when a huge bunch of girls in our residence at Acadia University used to pile into the reception room to watch the Star Trek episodes on a small black and white TV. I like how they have opened the present series up to a wide open future. I highly recommend Into Darkness which is excellent! The first ten minutes was worth the price of the ticket for sure. I saw it twice. The science has progressed majorly! Hope all is well with you!

Thanks for this review, Adam. I'll mention it to my husband who is a real science fiction fan. I was a fan of the original many moons ago.

I really liked this movie -- the new cast is a fantastic "update" on the old favourites. Except for Scotty and Chekov. I'm not fussy about the new actors in those roles. They're too high strung.

I just watched this movie for the first time back in June and I was highly impressed. I then saw Into Darkness about a week later and was even MORE impressed. Great movies.