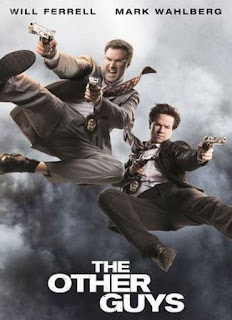 As many of you know, I've been a big fan of most of Will Ferrell's movies. I overlooked The Other Guys when it came out in 2010. My brother had recommended I see it, and I eventually got around to it. It's basically Will Ferrell's take on action movies.

The plot begins with the bizarre deaths of New York's most famous police officers. Their absence leaves many policemen trying to fill in the heroic void. Detective Terry Hoitz sees this as a chance for him and his partner Allen to escape the dull life of office duty.

Initially being unsuccessful as heroes, they gain some luck after Allen's boring permit case turns out to uncover a big story concerning a corrupt businessman and many others. However they more they go after justice, the little help they get from their superiors. But after many comical blunders, they get closer to the truth.

Overall I ended up really liking The Other Guys. I thought Terry and Allen worked really well as two detectives who have nothing in common and often never get along. Also the scene where Terry meets Allen's wife was hilarious. It's often ridiculous and stupid on purpose, but the political truths at the end showed that it wasn't just a goofy comedy.
Posted by Adam at 1:00 PM

The jump thing was sooo dumb, couldn't like it after that

Thanks for your lovely words on my last post!
Judging by the poster, it's not my kind of movie! :-)

Your post just reminded me I have to finish watching this movie! I've seen about half of it, and did love it:) Mark and Will had great comedic chemistry.

I absolutely hated this one! Think I fell asleep during it, which I never do in movies.

Now, Adam, my good man......this is where we part company in thought, for awhile...I absolutely can't STAND Will Ferrell as a movie star.....I've never seen even one movie that I liked him in. Having said that...I LOVED him as Pres. Geo W Bush on SNL.
Wanting to be fair, tho....I'll see this movie if ever I get the chance. :)

Thank you Love this actor too!
http://afinaskaterblogspotcom.blogspot.ru/

Since I have not been to a movie in years, really no one I particularly like. I would enjoy a simple, old clean western.

I've seen the trailer and this seems to be very funny