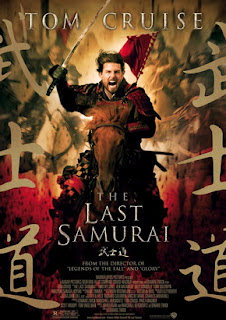 Personally I'm not a big fan of Tom Cruise, but I really did like The Last Samurai. It's historical fiction, and it's also set around the same time period as one of my favorite anime shows Rurouni Kenshin. Like Kenshin, the Meiji Restoration and the aftermath of the Boshin War heavily influence the story. While it may seem silly that a Caucasian actor would be cast in a movie about Samurai, Cruise's character is based on the French officer Jules Brunet who was a veteran of Japan's Boshin War. 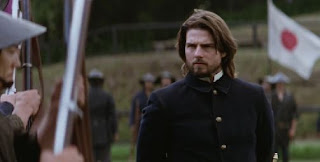 The movie is inspired by real events, but is given original characters and a story for more creative freedom. Basically Cruise plays  Captain Nathan Algren, an American soldier who had been traumatized by the battles he fought against Native Americans. He arrives in Japan to help train Imperial Japanese troops to become more modernized. Their first challenge is a samurai rebellion which refuses to accept the changes of their country.

Algren's forces lose a battle against the samurai, and he is captured. Their leader Katsumoto (who is based on the historical Saigo Takamori) somewhat befriends Algren, and is taken care of by Taka and her son. Though he faces the bitter irony with both sides knowing that in battle he made Taka a widow. Despite the conflict, Algren eventually becomes a member of the community, and takes their side is the great battle ahead. 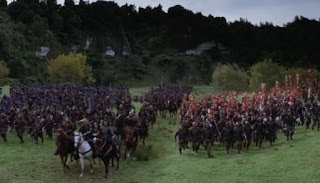 I was pleased to learn that it did very well not only critically but in theaters in both America and Japan. Usually American attempts at making movies heavily based on Japan and Japanese culture/history turn out horrendous, but they did a marvelous job.
Posted by Adam at 1:00 PM

Have never seen it but it is on my "to see" list -- someday!

I like the sound of this movie, thanks Adam.

It was a great movie

thanks for your review about the film)
Thanks for sweet comments
http://afinaskaterblogspotcom.blogspot.ru/

I'm not a follower of Tom Cruise, that is the end.

I remember this, yeah and I saw in the cinema, not like now I see all in cable!

We actually have this DVD, but I haven't seen it. My hubby likes it:)

I seriously dislike Tom Cruise, but after reading the comments, I may have to put that dislike aside and rent it.

I have seen it. I don't like this kind of movies, but this one was fantastic, Greetings, Joke

I haven't seen this film even though we have it and I'm tempted to. I'll have to really consider it after this post.

I also liked the Last Samoerai. Certainly the landscapes.