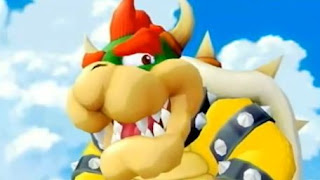 Out of all the main Mario games, Bowser's role in Super Mario Sunshine was probably his strangest ever. He doesn't really show up until the very end (his son Bowser Jr. was more of the antagonist at first) and is more sympathetic than his previous incarnations as a heartless monster. 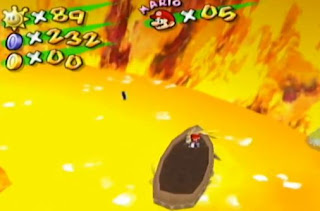 I will have to say the lava area getting to the Bowser battle was one of the most frustrating things in the entire Mario series. I only managed to get through the volcano a single time. 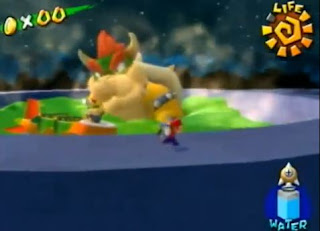 The final boss battle is one of the criticized in the whole Mario series. Mainly because all you have to do is rocket stomp the arena four times while Bowser and his son barely posing a challenge. I liked it though, the rocket stomp was really cool from that height. 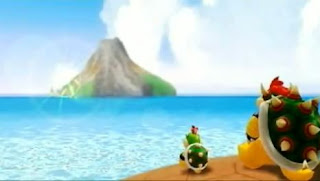 It was also the first game were Bowser talked past a sound. Bowser basically told Bowser Jr. that Princess Peach was his mother, and at the end his son realizes that his father is a liar. Leaving us with a rather unintentionally hilarious conversation.
Posted by Adam at 1:00 PM

I don't really play video games, but I am very fond of lava. I can relate to getting through a volcano! Have a good one!

I have this game. I repurchased it sometime in 2011. I lent my first copy to someone and they never returned it. Funny reading this for other games would be spoilage, but of course no one really plays Mario games for their story. I hope to finally beat it, but haven't had the time due to school and stuff. By the way, what gaming systems do you have and do you plan on get an xbox one or ps4?

This was the one Mario game that I could never beat...I played it for a year and a half but could not beat it.

Was a fun one

One of the last ones i played and beat