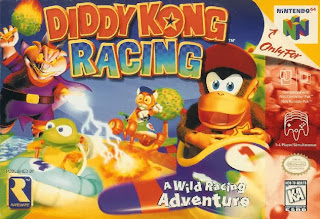 While Mario Kart has been king of kart racing games since 1992, it has seen many imitators and rivals.  Diddy Kong Racing was the first kart racer (that I know of) that Nintendo had done outside the Mario series. Though technically Rare (who made the Donkey Kong Country series) were the real team behind it. 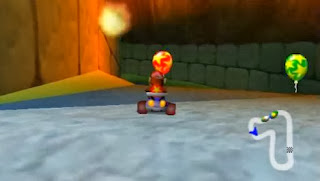 It featured a similar set-up to Mario Kart, with racing through colorful themed tracks with power-ups to use. The cast didn't feature Diddy Kong's famous uncle, but original characters. Most notable would be Banjo the bear (who would later star in Banjo-Kazooie) and Conker (the star of Conker's Bad Fur Day) the squirrel.

What also set it apart from Mario's was the ability to use hovercraft and planes. The game received a very positive reaction from critics and gamers alike. It's often remarked as one of the most beloved N64 games, with many thinking it was superior to Mario Kart 64. 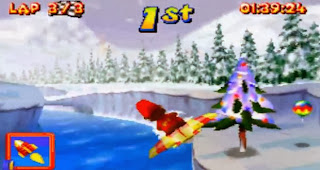 No real sequel was ever released as Rare left Nintendo for Microsoft. Though surprisingly they came back to develop a remake of Diddy Kong Racing for the Nintendo DS. It featured online-play, but Conker and Banjo were absent. Though ironically despite some improvements, the DS remake received a mixed reaction. It wasn't considered terrible but it was vastly overshadowed by Mario Kart DS.
Posted by Adam at 3:00 PM

awww loved it so much!! and also mario kart was so great. I was such a pro haha

I have only played the Mario version so far!

The kids routinely kick my butt in any of these racing games. In fact, I think they get a big charge out of seeing how incredibly inept I am.

If you remember all you post about, you are one smart fellow. You have to retain some of it..

I used to love playing Mario with my son and can still remember that tune in my head.

Awesome game, played it a ton

This was a great game. I haven't played the DS version much but I spent hours on the N64 with a friend back in the day. I rarely played it alone because the story mode was very hard. DKR was definitely much better and richer than Mario Kart 64. DKR was not originally intended to feature Diddy Kong at all, btw. For some interresting info about the game's development, read here : http://www.unseen64.net/2010/02/27/diddy-kong-racing-n64-beta-proto/

Talking about N64 Rare games, have you played Blast Corps, Adam ? This is another underrated gem.

I haven't played this one, but I would love to use the hover craft plane when playing Mario Kart on the Wii with my girls!