A Look Into Video Games: The Simpsons Wrestling (PS1) 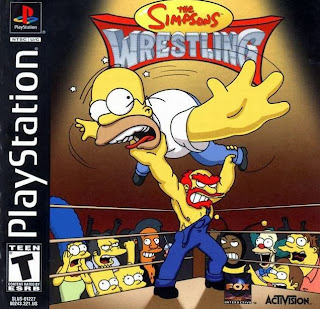 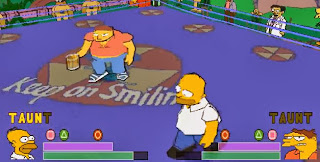 The late 90's and early 2000s were also an era of countless wrestling games, so I guess a wrestling game based on a beloved cartoon was inevitable. The game features a cast of the whole Simpsons family, friends like Apu and Barney, and less-known characters like Bumblebee Man and Professor Frink.

The game features a similar set-up to other 3D wrestlers, but with the addition of power-ups such as donuts to make you faster. It also featured original dialogue from the cast of the show, and many of the characters that don't show up to wrestle can be seen in the audience. 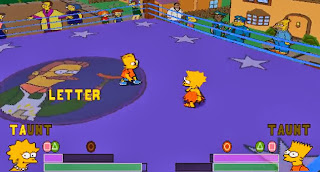 Overall The Simpsons Wrestling received a very harsh reaction from critics. It came out after the end of the PS1's prime, and neither the graphics nor the game-play impressed many. I was a huge fan of the show, but I didn't get a PS2 (which could also play PS1 games) until a few years later and by that time I had forgotten all about it.
Posted by Adam at 1:00 PM

I don't remember this one at all!

You know.... I've never watched the Simpsons. I guess we're pretty out of it.

So weird, never heard of it before!

What about the Simpsons Road race game?
That really kicks my ass.
D'oh!!

looks dated for sure