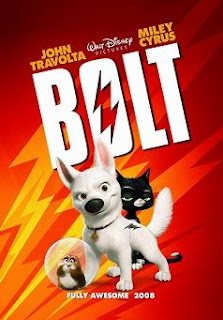 I remember hearing about Bolt back in 2008, but I ignored it for a long time. For years I thought it was a Pixar film, but I was shocked to find out it wasn't. It actually was made by another animation studio under Disney. 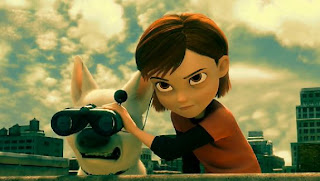 The film starts off with Bolt and his "person" Penny. Bolt and Penny star in a sci-fi action show where Bolt is a super-dog with amazing powers. In order to provide more believable acting, Bolt thinks everything around him is totally real. In one story Penny is separated from Bolt in a cliff-hanger, and Bolt is furious. He escapes from his Hollywood trailer, and in his search for Penny he accidentally winds up in New York City. 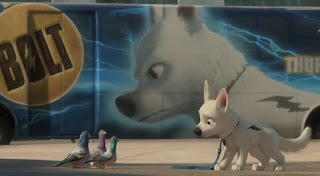 In New York, Bolt notices his "powers" are gone, and Penny is nowhere to be found. He meets up with a cat named Mittens whom some pigeons told Bolt that she was a minion of his nemesis Dr. Calico. He demands Mittens to lead him to Penny which has the duo going across America in Bolt's quest. 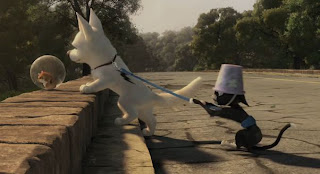 I ended up loving Bolt, though I thought the story moved a little slow at first. I thought they did a great job showing Bolt coming to grips with reality. I also enjoyed Mittens trying to reason with Bolt, and laughed at Rhino the hamster's hilarious personality. While Bolt may not be from Pixar, they could've fooled me.
Posted by Adam at 2:24 PM

Bolt is one of my daughter's favorites.

Still have yet to see this one, may have too now

I loved this movie:D And I actually did think this was from Pixar too:O

This sounds like a lovely movie Adam and thank for the great review. I don't remember this one but it is something I would definitely like to see.

I missed this one....will look for it 'cause my youngest grand will love it. Thanks for the heads up.....

I have never heard of it but quite like animated films, must look it up.

this is the first time I hear about it which says a lot about the film :) I do like those little animals in the poster

My daughter really enjoyed this movie!