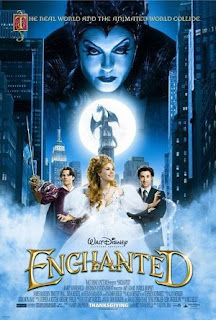 Back in 2007, I don't even recall Enchanted ever coming out. I really liked its star Amy Adams in The Muppets and Man of Steel so I wanted to give Enchanted a chance. Daisy was also excited to see it as she's always been a big fan of Disney movies.

The film starts out in the cartoon fairy-tale land of Andalasia. The Queen Narissa is worried that her step-son Prince Edward will fall in love and get married which will cause her to lose the throne. When Edward falls in love with a young maiden named Giselle at first-sight, they plan to get married the next day. On their wedding day, the Queen casts Giselle into the harsh reality of New York City.

Desperate to find her Prince Edward, Giselle meets an engaged divorce-lawyer who offers to help her get "home". While he initially thinks Giselle is crazy for acting like the world is a fairy tale, they become good friends. Prince Edward arrives in New York is search of his bride, but is oblivious to the fact that his servant Nathaniel has been instructed by the Queen to make sure Giselle never returns to the kingdom. 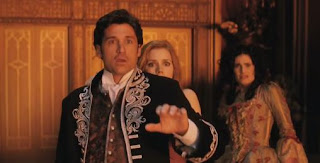 Daisy and I ended up really liking Enchanted. It's almost like a parody of the classic princess stories, and I loved that world meeting New York City's cynical reality. Amy Adams is marvelous as Giselle, and I thought James Marsden (Edward) and Timothy Spall (Nathaniel) also played excellent roles. I can see why Enchanted had achieved such critical acclaim back in 2007.
Posted by Adam at 3:32 PM

I thought that Enchanted was really clever and funny.

I like it!Amy Adams is such a good actress! althought this is not her best role...Kisses:)

I liked it too.

Instead, we watched Imposter last night because my husband likes science fiction. Turned out we'd seen it before. Must be something about getting older; we couldn't remember a lot about it so we watched it until the end.

I enjoy Disney movies too though i don't think I ever saw this one. I will have to check it out. Thanks Adam!

I like this movie so much and I have watched it many times :)))

I haven't seen this but now I will definitely watch it. Good writing and thanks for the recommendation.

Never saw this one, but it does sound intriguing in a disney way

Haven't seen it as yet.

I loved this movie! I had forgotten about it.

I love this movie! One of my favorite non animated Disney films yet!

Have seen this movie three times and enjoyed it just as much as the first time I saw it.