Fact of the Day: Abner Kneeland 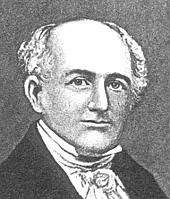 Abner Kneeland was the last man in America to be convicted for blasphemy. He was raised a Baptist, but later converted to Universalism. His views later drifted away from the Universalist Church and his religious ideas later got him in trouble with the state government of Massachusetts back in the early 19th century.
Posted by Adam at 12:00 AM

Email ThisBlogThis!Share to TwitterShare to FacebookShare to Pinterest
Labels: Christianity, fact of the day, Massachusetts

Unbelievable, good that times have changed.

What an unfortunate way to go.

What was the punishment for blasphemy?

he spent two months in a cell

it rarely happened in his day, but the anti-Federalists in the 18 and 19th centuries in many states made it possible to make small laws to side-step the freedom of religion and separation of church and state.

Thank a supreme court for granting us more rights than congress or a state house.

Hello, Adam. I just discovered your blog and I'm now following along via Bloglovin. Looking forward to visiting often.

I have never heard about Universalist church. Kisses:)

Universalit church? Mmmm, I would be happy to read more about or
if you don't mind iluminate us in a new post :D ^_^

Wow, everyone would be locked up now a days

No freedom or with freedom of speech can cause one to sin.

I can't imagine not being able to express my opinion for free of getting jail time. So glad the times have changed!