Fact of the Day: Angleterre 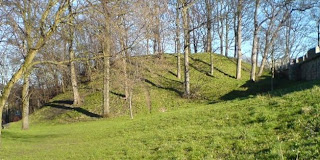 When William the Conqueror became King of England, an old dialect of French (Anglo-Norman) became the official language of the country for hundreds of years. William I was from Normandy (present-day France), and French was his main language. Because of William I, the Germanic English language's vocabulary received many borrowed words from French or Latin origin.
Posted by Adam at 12:07 AM

Interesting how a language develops.

That's impressive, surprising too, that French was the official language in England for centuries. Who knew? Not I. Thanks for the info.

One reason English is such a cool language!

So many stolen words...

the same situation as with Serbian and Turkish language....

That is why it is such a rich lanuage!

It's very interesting how languages evolve over time.

The English language became richer for it!

The above comments have said it all! I'm glad I'm a native English speaker and didn't have to learn it as a second language!

I feel like I am back in school when I read your post. So informative. Love the tree scene.

So interesting...
I love our English language and realize we use a lot of other country words..."biscuit"....I never knew until a few years ago that it was a French word. :))

So they kinda cheated

I actually knew this one!

In other words England was a colony of France.

not exactly, William was not a king of France, but rather a duke of Normandy. His biggest role of power was as king of england.

Very interesting. Makes me wonder how much more languages will develop and change over time.