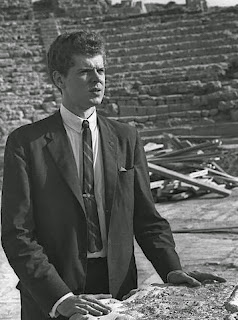 In 1958 during the height of the Cold War, the Soviet Union hosted an international music competition. While the event was designed to demonstrate Soviet cultural superiority, it was won by an American. Van Cliburn's piano talent led to the audience giving him an eight minute standing ovation. When he returned home he was treated to a ticker-tape parade in New York City, the only time one has been held for a musician of classical music.
Posted by Adam at 12:00 AM

Yeah, that was such a big deal. Van Cliburn just died a few months ago actually. He remained very popular in Russia too.

Interesting, and I wonder what pieces he played to have that long an ovation.

Yeah, that sure showed them!

What a wonderful pianist! In the 60s my mom and I went to see him play at Carnegie Hall in New York, we loved him!

Music can mend all fences, at least for 8 minutes, it seems

Music...a language understood by all.