Fact of the Day: Goldfish Ancestor 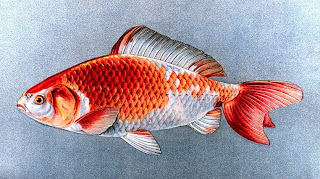 Goldfish originated in ancient China by as early as the Jin Dynasty. Its ancestors were gray carps (with genetic evidence suggesting the Prussian carp) that were primarily kept for food. The carps eventually started to produce mutations with the colors red, yellow, orange on their scales. After this was discovered, the fish became popular in ornamental ponds and water-gardens.
Posted by Adam at 12:00 AM

Email ThisBlogThis!Share to TwitterShare to FacebookShare to Pinterest
Labels: china, evolution, fact of the day

Some koi cost as much as purebred horses!

nice to know this!
I love watching goldfish!

Interesting :) sounds a bit like the evolution of a pokemon with the color mutation ;)

Carps scare me. Reminds me of those bridges at amusement parks where you throw some corn in the water and in a split second thousands of carp rush in below you. UGH!!!

Interesting. I would have never thought that they evolved from a gray species. I find evolution to be so fascinating. I wish they offered a class on it - I would totally take it.

They evolved into very pretty fish!

Fascinating! Did not know that.

though koi came out of Japan through common carp

We have two fantail goldfishes that we've had since 2008. Love them:)

Nice to know and I have a big fishpond outside where many goldfish live :)

So that was the origin:)

Well, at least some mutations are beautiful.

Very interesting! There was a koi hanging out in one of the pools along Piney Creek for several years ~ Then it got washed away in a serious flash flood in 2012. I loved to watch that fish in a wild pool. It would have been fun to know its life story! Take care!

Very interesting! They are one of the prettier fish!

When I was growing up in Waipahu, our neighbor had a koi pond with the most incredible colors. They are beautiful!