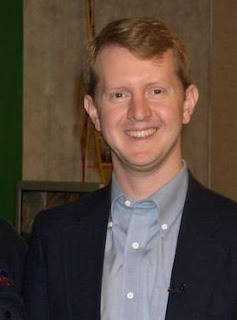 While he's better known for his legendary run on the game-show Jeopardy!, Ken Jennings is also a member of the Democratic Party. Senators Chuck Schumer and Harry Reid had urged Jennings to run for a Senate seat representing Utah in 2004. Jennings declined to run, and the seat was re-won by Senator Bob Bennett.
Posted by Adam at 12:51 AM

Email ThisBlogThis!Share to TwitterShare to FacebookShare to Pinterest
Labels: democrat, fact of the day, Jeopardy, Utah

I remember when he was on Jeopardy. But I didn't know this about him.

I remember that goofy goober.

I wish he would run - but Utah is such a heavily conservative state that he would have quite the uphill battle.

I never knew he ran for office! Again, thanks for the info, Adam:)

Sorry, I haven´t heard about him before.Kisses, Adam:)

A smart politician? I've never heard of such a thing. No wonder he didn't run!

Members of the LDS church who are democrat are so rare it's like spotting a unicorn.

he didn't actually run, when big names reveal their political views both parties try very hard to get them to run.

Like old Arnold Schwarzenegger, he ran as a Republican governor in a Democratic state, and didn't come close to losing.

That is one smart dude! I never knew they were trying to get him to run for Senate!


xoxo;
Into The Blush, a Beauty Blog by Kenny.

That's an interesting fact! I actually remember when he was on Jeopardy.

great fact, thanks for sharing :)

We don't get Jeopardy over here in the real world.

Be totally foreign to have a smart politician

he knew in utah he wouldn't have a chance.