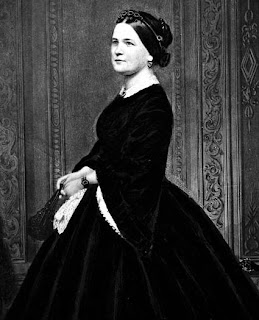 In the 19th century, a young woman named Mary Ann Todd was courted by a Democratic politician named Stephen A. Douglas. Todd eventually married a fellow Whig, which Douglas later defeated in a Senate race in Illinois. The two gentlemen faced each other in politics one last time in the 1860 President election, and Mary Todd became first lady as her husband Abraham Lincoln became president.
Posted by Adam at 12:00 AM

Interesting story - and her dress is very pretty!

Huh, how old was she when this happened?

You come up with cool facts!

I wonder if she felt smug seeing her ex defeated!

I hear she was a firecracker!!!

that's a lot of plush for the gown...

I bet she was pretty proud about that.

very interesting :) must be fun to see the ex fail ;)

I loved Sally Field's portrayal of her in "Lincoln"

I was skeptical at first that Gidget could pull it off, but so did I.

What a sad, tragic, complicated story that is, huh?
Then Mary became nuttier than a bag of squirrels.
Quite sad.

Guess she knew how to pick a winner.

By the way, nice picture choice. I think most people would be surprised that she was fairly attractive.

she didn't age well that's all I can say

A political triangle in more ways than one

Al beat me to it, but yeah, that's a very... flattering picture. The rest of them don't nearly make her look so good.

I am learning lots of things with your blog. Kisses:)

I love her dress but she looks so old to get married!

Great trivia info. I did not know this. I learn new stuff from you.

She had a lot of tragedy in her life.

I didn't know she was courted by Douglas!

well I think the photo was taken after she was married. Photography didn't really start to get big until about the time she was first lady.

So weird I actually know this because of the movie Abraham Lincoln, Vampire Hunter....no joke!

She looks much prettier here than the actress that portrayed her in the movie Lincoln!

She backed the right horse!

She may have married the right man, but it did bring a life of sorrow.