Fact of the Day: President Grandfather 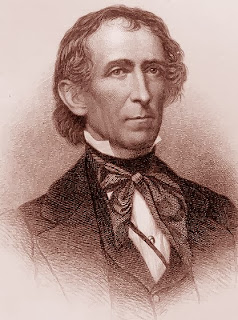 President John Tyler had many children during the course of his life. He had a son named Lyon when he was 63 years old. Lyon had two sons while he was in his 70s, and both of the brothers are still alive. Making Tyler the oldest president with living grand-children.
Posted by Adam at 12:05 AM

Email ThisBlogThis!Share to TwitterShare to FacebookShare to Pinterest
Labels: fact of the day, John Tyler

For now. We'll have older ones soon enough.

This is mind-boggling. Just trying to wrap my head around the fact that John Tyler's grandchildren are still alive is blowing my mind. Wow.

it is pretty amazing, he was one of the first batch of people to be president. He was a good bit before Lincoln.

I feel like my head is going to explode trying to wrap my head around this! :)

That's amazing, how proud he would be.

That is pretty cool.

Seriously? Which makes me wonder how old his wife was.

he was 30 years her senior. To his 2nd wife anyway.

dude was busy getting busy.