Fact of the Day: President's Hat 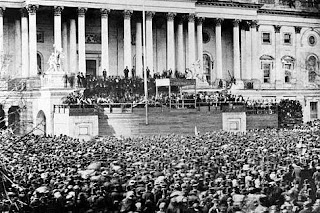 Even though he was defeated by Abraham Lincoln in the 1860 presidential election, Stephen A Douglas did attend his inauguration. Before giving a speech Lincoln took off his hat, but had no place to put it. Douglas offered to hold it and remarked "If I can't be the President, at least I can hold his hat.".
Posted by Adam at 12:00 AM

Wow that is really interesting ;)

That is a funny remark! At least he was gracious about the whole thing.

Now there's a man with a self-deprecating sense of humour!

At least he wasn't a sore loser. I wish the same could be said about some of our modern-day politicians :)

He definitely have a good sense of humor.

haha a politician with a sense of humor, they actually make those any more

So elegant this attitude. It says a lot of this man.Kisses:)

I love his sense of humor:)

What a funny detail, thanks for sharing! Thank you for your supporting comment on my blog!

At least he was a good sport about it! And who wouldn't want to hold that hat!?

LOL! Thanks for the laughs!

That is such a cute anecdote. I love it.

that's what you call a good sport! :)