Fact of the Day: Roza Shanina 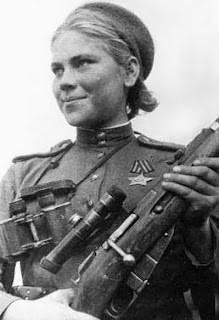 One of World War II's most notable soldiers was the Soviet Union's Roza Shanina. She personally took out 54 German soldiers, which earned her the nickname "the unseen terror of East Prussia". She died in 1945 shortly before the end of of the war by shielding a wounded officer.
Posted by Adam at 12:00 AM

What an incredible woman!!!

We are the best.. ja. .So interesting.. A regard

Russian had millions of amazing heroes in both world wars!

One of those who gave all for her country in time of war.

Damn, wouldn't want to get on her bad side

Even with that smile she looked like quite the bad ass.

I think I heard about her in the film " Enemy at the gates "; very interesting post. Kisses:)

wow what a hero.

Wow! I can't believe that I've never heard of her.

I had never heard of her, thanks !