Of all my favorite super-heroes, DC's The Flash is far from the top. I was a bit disappointed to learn that the new animated movie had him as the central character. Then I learned it's based on a popular comic book story-line that affected nearly all the people in the DC universe. 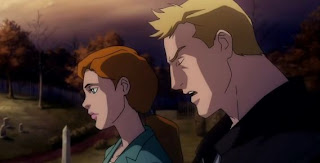 The film starts out with The Flash (Barry Allen) lamenting over his mother's early death when he was just a boy. During his visitation to her resting place, he learns that a group of villains are currently causing havoc in Central City. He discovers most of his old foes ready to fight him, though the biggest danger is his arch-nemesis Professor Zoom. With the help of the Justice League, Zoom's plan is ruined. But as he's taken away he reminds Barry Allen that he can never save his mother. 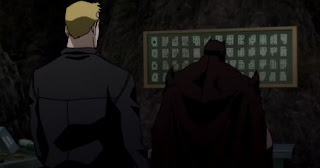 Soon after, Barry wakes up and discovers to his shock that his mother is alive, and his super-powers are gone. He travels to Gotham to seek Batman's advice, but he is met by a much darker version of Batman. He turns out to be Bruce Wayne's father Thomas, and they figure out that their universe has changed where Thomas and his wife survived instead of their son. Their lives are not the only ones unchanged as Aquaman and Wonder Woman are at war with each other, and the world doesn't know any hero called Superman. The super-heroes join forces with the heroes left on Earth to not only stop the super-war, but to get reality back to normal. 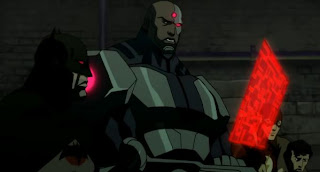 Overall I really enjoyed this new Justice League film. While a few parts are a tad boring, I really enjoyed seeing the alternate versions of many characters. Especially Thomas Wayne as Batman, as he is a much different Batman than Bruce could ever dream. Outside of The Dark Knight Returns, this has been my favorite movie of the original DC animated films.
Posted by Adam at 1:00 PM

Hi dear! Thanks for commenting! Love your blog!
http://afinaskaterblogspotcom.blogspot.ru/

But, if Thomas Wayne wasn't murdered what spurred creation of Batman? Oh, I'm sure the comic explained it all. Good thing there was no Superman. The dude can do it all. Like the queen in chess.
Oh dear, did I just call Superman a queen?
Oh dear, did I just write "oh dear?"
Who's the queen now?

the death of Bruce was the motivation.

Though explaining why he'd pick a bat to base his costume off of is never explained.

Spolier alert though, his wife Martha is so distressed by Bruce's death that she goes insane and becomes the Joker.

Never was all that fond of the Flash. He never struck me as very interesting.

Bruce Wayne isn't Batman anymore? I have fallen way behind.

Never watched this one as not big on the flash, may have to now