Massachusetts May Remove "Under God" From Pledge 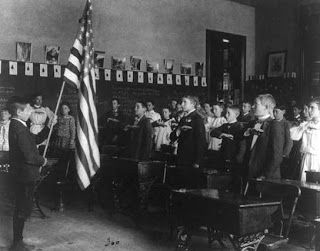 A new case is being considered by the Massachusetts Supreme Court on the words "under God" in the Pledge of Allegiance. While schools can no longer force students to say the pledge anymore, the argument in the case (besides the separation of church and state) is that the words "under God" make non-believers look non-patriotic. 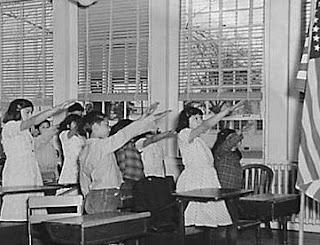 Being agnostic though, I can tolerate the words "under God" in the pledge as that's far better than creationists trying to put pseudo-science in the classroom or Evangelicals trying to force students to read or listen to the bible. However I do agree that the words in the pledge are unconstitutional, and not only that the words "under God" weren't added until 1954 (62 years later) during a paranoid fear of "godless communism". I'd prefer to the pledge to go back to its 1924-1954 version.

"I pledge allegiance to the Flag of the United States of America, and to the republic for which it stands; one Nation indivisible with liberty and justice for all."
Posted by Adam at 10:00 PM

Email ThisBlogThis!Share to TwitterShare to FacebookShare to Pinterest
Labels: Massachusetts, my thoughts on politics, politics

Jeez, what's with the Nazi salute in that photo? Yikes.

I had no idea that the U.S had a previous version of the Pledge of Allegiance that did not include the words "under God". I think it's a great idea to go back to that.

I had no clue that those words were not added until 1954. Very interesting. I wonder how many defenders of of those two words being in the pledge know that?

Sorry, but I will always say "under God", no matter if they change it back or not.

I'm with Debra here? That really does look like a Nazi shot. Was it normal back then to point at the flag instead of placing your hand over your heart?

that's the way we used to salute the flag. It was changed during WWII for obvious reason to hand over the heart

remember this was before WWII, the Germans made it very unpopular

I have also heard that "under God" was never in the original Pledge of Allegiance. I know you're actually not supposed to have children say those words, but it was always said at our school anyway.