I remember back in the early 2000s when Soul Calibur II first hit the major consoles. I got the Gamecube version, and I loved how they included Link from the Legend of Zelda series. I went back and played the original (I also remember playing Soul Edge in the arcades), and I was very disappointed to see Soul Calibur III as a PS2 exclusive. I skipped the third game, and played Soul Calibur IV on my 360. While it was praised by critics, I just didn't really dig it that much. But I was willing to give Soul Calibur V a chance. 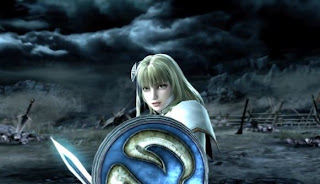 The major thing I noticed in V is the absence of many of my favorite characters. Sophitia is gone, and is replaced by her son Patroklos, and her daughter Pyrrha. Their aunt Cassandra is absent, and so is the ninja Taki who was replaced by her student Natsu. Even some of the characters that do return, don't look like how I remember them. Even though most of the replacement characters play exactly the same, they are pretty lame. 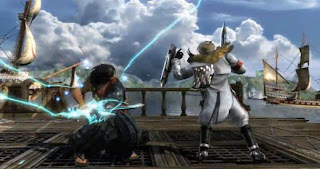 The fighting is about the same as it was in IV, just with some new moves, characters and stages. Most of the standard modes return as well, with a brand-new story mode. Which mainly features the story of Patroklos and Pyrrha. The story mode is a bit boring, and feels like a chore. I also think they changed the way matches are won. It's basically not a best two out of three odds anymore, but rather three wins will make you champion. While I guess this helps the players who are more skillful, it makes them seem too long and not very awesome when up against a boss character. 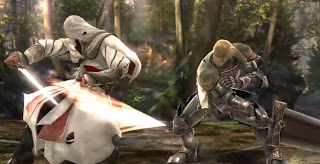 Overall V disappointed me even more than it's predecessor. Everything is more of the same, and even online-play didn't save my experience. I played a few matches only to be absolutely outclassed by others even when I set the option to be matched with people on a similar skill level. I lost most of my faith in the series matching the fun I had with Soul Calibur II those many years ago.

Too bad you didn't get to play SC III, it was very good, it sill had the classic characters while introducing a very cool character creation feature.