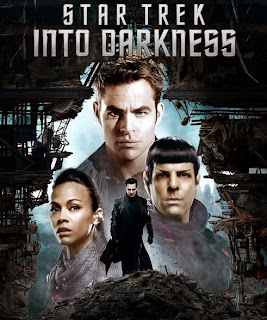 While I've always enjoyed science-fiction, I never really seen the original Star Trek series nor it's later movies. I thought 2009's Star Trek would be a good place to give the series a try, and I thought it was an excellent movie. Afterwards I was more than eager to see its sequel Star Trek Into Darkness. 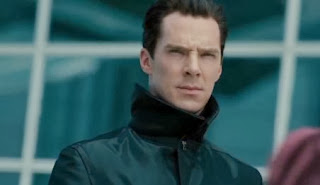 The film takes place not terribly long after the events of its predecessor. James T. Kirk is now a real Starfleet captain, but later is demoted to first officer after a very unwise move during a mission. His former mentor returns as Captain, but is soon killed in an attack by the mysterious John Harrison. The villain is revealed to be a former member of Starfleet who uses advance technology and his genius intelligence to ruin the United Federation of Planets.

Angered by the loss of his mentor, Kirk convinces Admiral Marcus to regain control of his ship as Captain to bring John Harrison to justice. Kirk won't have it easy as Harrison is hiding in the Klingon home-world. Their mere presence could mean war between the Klingons and the Federation. Even without the fear of inter-galactic conflict, John Harrison will prove to be Captain Kirk's greatest challenge.

Overall Into Darkness impressed me even more so than its predecessor. It's got incredible action, an engaging story, memorable moments, and plenty of surprises. The star of the show is John Harrison, who may be one of the greatest villains of all fiction. I heard some Star Trek fans were deeply disappointed, but honestly this may be my favorite film of the year.
Posted by Adam at 12:18 PM

Good review Adam. Apart from being a fun, sci-fi, action adventure film, the movie has a surprising amount of layers to it, which got me when I least expected it to.

yet another great post!. Can't wait to see more of your posts!

I did love the first one, but have not seen this one yet. Can't wait. Everyone was raving about Benedict.

I loved this movie so much! I love Star Trek.

I enjoyed this movie although I thought the 2009 rebooted Star Trek was better. However, there was a great "role reversal" aspect to this one -- you must watch the old Star Trek movie "Wrath of Khan" with the original cast to understand it.

I have not seen it yet!)

I saw this in the theater this summer and it was the best sci-fi film I've seen in a decade.

Have not seen it yet

You're one of the few people I've heard of that liked the second movie.

I didn't enjoy the sequel as much as I loved the first film. This one was too focused on Cucumberpatch instead on the crew.....

I haven't seen these movies. I am surprised to hear the sequel is good. Usually, they suck!