While DC has done a fine job with the original animated movies, I missed out on the first one Superman: Doomsday until now. Like most of the better original films, it's directly based on a the story The Death of Superman and the stories that followed it back in the 1990s.

The film starts off very close to the comic where a monster named Doomsday is awoken, and wreaks havoc upon the Earth. When he reaches Metropolis, he is stopped by Superman who comes to realize that Doomsday may be too strong for even the Man of Steel. With the city in ruin and many in danger, Superman uses all his strength to destroy Doomsday. Though even though Superman is victorious, he dies in Lois' arms from his injuries. 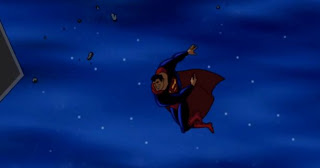 The world mourns his loss, with even his arch-nemesis Lex Luthor bitter that he passed away before his time. Then one day out of the blue, Superman returns from the grave and saves Lois from a super-villain. While he has all the same powers as the Superman they all once knew, he seems to suffer bits of amnesia and later shows no mercy for villains.  Lois suspects that he isn't the Superman she loved, but will the true Superman ever return? 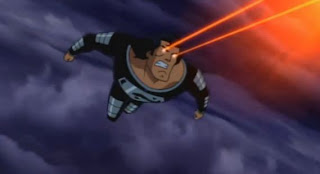 Overall I thought that Superman: Doomsday was a good film with plenty of action and a decent plot. Though it could of been so much more. In the comics, four beings claiming to be the real Superman (in some way) appear though they are combined into just one semi-evil Superman for the film. They could of have something really fantastic if they would've have split the story into two films (like they did for The Dark Knight Returns), but they didn't. It isn't terrible, but it regrettably didn't not meet it's full potential.
Posted by Adam at 9:47 AM

Never watched this one, maybe one day as it just sounds okay

I don't think I've seen this one.

Read the comics so I don't need to watch a watered down version.

Happy to hear form you :)

Superman always makes me think of Chris Reeves. No one should have to go through what he did ~ I speak from experience. My first husband was paralyzed. I like the reviews you post.

Haven't seen this one yet!